Daniel comes from Krnov, Czech Republic, he’s finishing law school in Brno and pursues drag. In this interview, he’ll be talking about reactions to his identity and his experience with hate crimes.

Can you introduce yourself, Dan?

I’m 25, I come from Krnov, and after finishing high school, I moved to Brno, where I’m studying law at Masaryk university. At the moment, I’m finishing my 5th year of studies, finishing my thesis and I plan to move to Prague in the autumn. I’ve got a part-time job as a receptionist at a hotel, but when I finish my studies, I plan to work as a lawyer. I spend my free time with my cisgender boyfriend and doing drag. It’s my hobby, and on the one hand it’s expensive, as well as costing a lot of time and energy, but on the other hand, I don’t want to give it up.

How would you define drag? How do you experience it, what does it give you? And how did you get into it?

I’ve always been drawing, singing, and I was quite creative (except for dancing, laughter). Two years ago, when I did my first performance in Prague through makeup, I found out that drag combines a lot of things that I’ve always been keen on. Like makeup, which I’ve just mentioned – I’ve been doing makeup for three years now, and it was my first impulse to start doing drag. Another thing that led me to drag was Rupaul’s Drag Race, which is basically America’s Next Top Model for drag queens.

I know about travesti shows in the Czech republic, but that’s something different. Travesti are staged for the sake of fun, laughter – a guy wearing a wig, dressing as a different person and performing her songs. Drag queens, on the other hand, have their own persona inspired by people, things and you even have drag queens doing stand-up or burlesque. Put simply, I want to be a beautiful woman. It makes me happy and I have fun doing it.

Where can people find you?

I mainly performed before the pandemic, my last performance was in October. I mainly appear in the Prague club Friends, where I recently had my first post-pandemic performance, which was great. Then I have shows on a steamboat, I organize drag brunches and I plan to perform at Prague Pride. I’m really inspired by Ariana Grande and my favorite drag queens Naomi Smalls, Alaska and Trixie Mattel.

How did the people around you react to your sexual orientation and you being a drag queen?

As far as sexual orientation goes, I’ve always had my family’s full support. There wasn’t any shocking coming out, my family took it calmly. During the second half of elementary school, I understood that I’m gay, even though I tried dating girls and kind of fought it. But my parents supported me.

With drag it was different, I tried to hide it at first, I even had a separate Instagram account. My parents hoped I wouldn’t do drag, they mainly wanted me to finish school. “If you do this, I don’t want to know about it”, my dad told me. They wanted me to hide it – now, we don’t talk about it and avoid the topic, even though they know. My mom sometimes talks about it with me, she even gave me makeup, but she hasn’t seen me live yet. My dad doesn’t want to talk to me about it. When I put a profile picture with makeup on Facebook, my parents asked me to delete it, because our relatives could see it.

Do you see a change in the public’s reactions in Prague, is the public more open? What kind of steps and changes would help?

Awareness is spreading through the younger generations, where different projects and campaigns we do help. For me, they help and I believe that it’s only going to improve. A general change is necessary, as well as listening to people and personally wanting to understand. 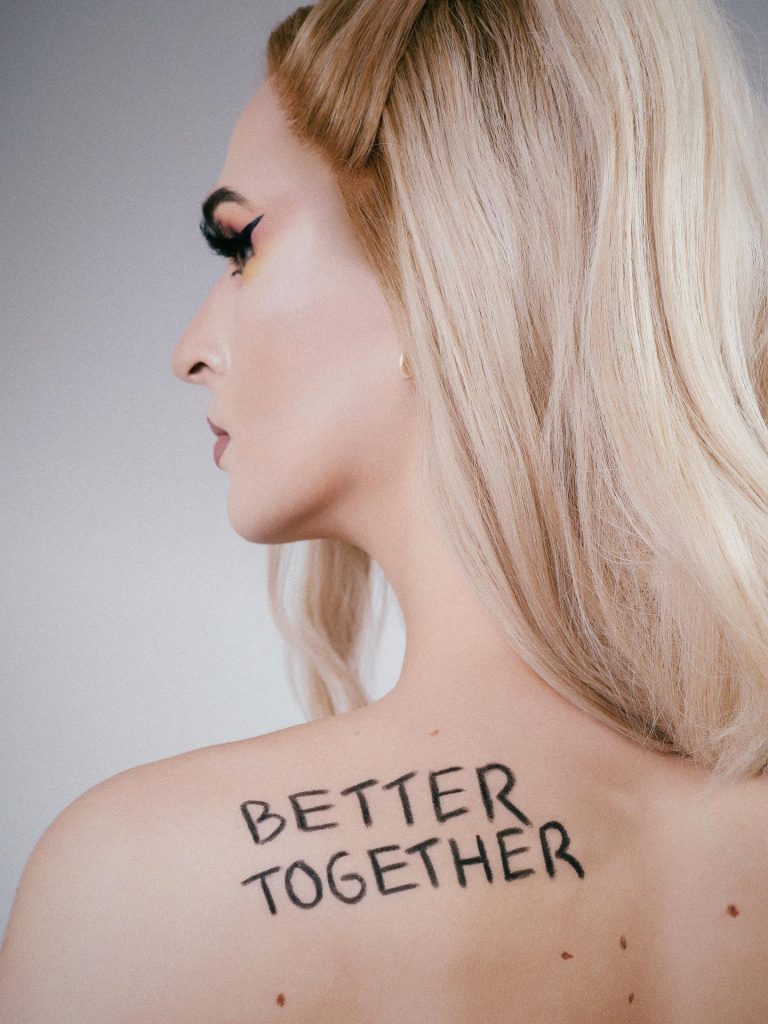 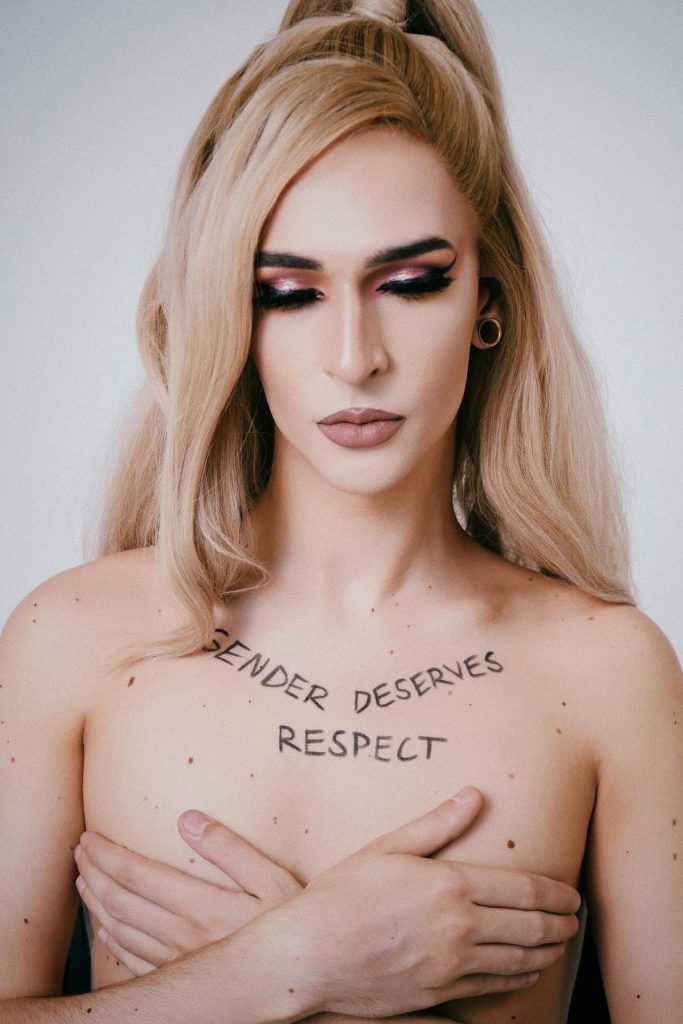 What kind of reactions do you encounter the most?

I’m open about being gay. I can see an improvement in society over the last couple of years, but it might just be because I live in bigger cities and don’t leave my bubble. I’ve trimmed my friends down. Sometimes I step out of my bubble and I’m shocked. Back home in Krnov, everyone knows I’m gay and when I meet someone after a longer period of time, they either pretend they don’t know me or they’re interested and ask questions. Now that I think about it, I experience these bad real life moments only rarely. Sometimes someone shouts at me across the street, but I ignore it.

When someone goes after my partner, I react though. Sometimes, when we’re in costume before a drag show, we see passerby’s ugly looks or they shout at us from taxis. It’s interesting that I get negative reactions more for being gay than being a drag queen. Maybe it’s because for the most part, guys generally act less violently towards women, I don’t know.

As far as the online world is concerned, I get a lot more reactions there, because people wouldn’t dare to say some kinds of things online. For example, I’m the first Czech drag queen to have a Twitter account, and there’s a nonstop flood of hate on there. Tik Tok isn’t any better. I’ve gotten comments telling me to kill myself, that I’ll rot in hell, that someone’ll beat me up, that I’m sick… A couple of people threatened to kill me, but I block these types of people. If someone writes a civilized negative reaction, I debate them, but if it isn’t heading anywhere I quit, it’s not worth it. What’s important is that there are much more positive comments. Gradually, I’ve developed a thick layer of skin when it comes to comments and insults, but sometimes it’s more unpleasant. That’s when I appreciate my friend’s and family’s support the most. What also helps is the knowledge that I’m not doing anything wrong. I don’t hurt other people.

Did you ever experience physical aggression or a direct verbal attack?

Unfortunately yes, a couple of times. One time in Brno, I encountered aggressive hotel guests, they called me a faggot, so I called the police. A young policewoman helped me, took me aside and asked me whether I wanted to fight this. In the end I let it go, I just wanted peace and quiet and them to be gone.

Then I have an unpleasant experience from Krnov, which happened last August. I was the victim of a homophobic reaction. It was the first weekend of pride week. I was in a club with my friend from the UK and we were standing by the jukebox. All of a sudden, a guy behind me started shoving me and accusing me of calling him a faggot. Which is absurd, because I had no reason to say that. In the end, it escalated to the point where we moved outside the bar, where luckily about 15 people defended me. The guys that assaulted me were threatening me and shoving me around – the main guy had a couple friends with him so there were two groups of people against each other. My friend called the police because we felt threatened. In 15 minutes, a car with 2 police officers that weren’t able to deescalate the situation arrived, and they laughed at us and asked me why I wasn’t at home. Meanwhile the assailants ran away. I wrote about the whole encounter on social media, then for Lui magazine and even talked about it in a club. I lost my faith in the police.

What message would you like to send as far as acceptance and equality of LGBTQ+ people is concerned?

Everyone wants to be respected, loved and have the same options to love as everyone else. Not having to encounter hate. We don’t want to harm anyone, so we’d like it if they didn’t harm us. Let’s behave to other people in the same way that we’d like them to behave to us. Footshop in Bucharest. Why? Why not