Previously, we’ve talked about how adidas is proactively challenging the climate crisis situation and trying to lower their own ecological footprint. This time, we’ll take a look at what Nike is doing to support the idea of sustainability and responsibility towards Mother Earth. We’ll talk about the freshly released Nike Space Hippie and about the Move to Zero project, which is supposed to lead Nike to produce sneakers without an ecological footprint. You’ll also find out how you relate to Nike’s sustainability.

Let’s start with the most current thing on the list. The Space Hippie project has lately become the flagship of Nike’s sustainable activities. This is a collection featuring four silhouettes, the production of which includes using recycled materials and, as such, some of the sneakers are recyclable themselves. The models are named (numbered) 01-04.

The Nike Space Hippies differ both in design and also in how much recycled materials they contain, which ranges from 25 to 50 %. The two main recycled components are the sole, made from Nike Crater foam, and a specially modified Flyknit upper.

Proof that Nike didn’t forget about the details – if you’re expecting your new Space Hippies to arrive in a classic red box, you’re mistaken. The Space Hippies are packaged in a simple box made from repurposed material printed on with plant-based ink. 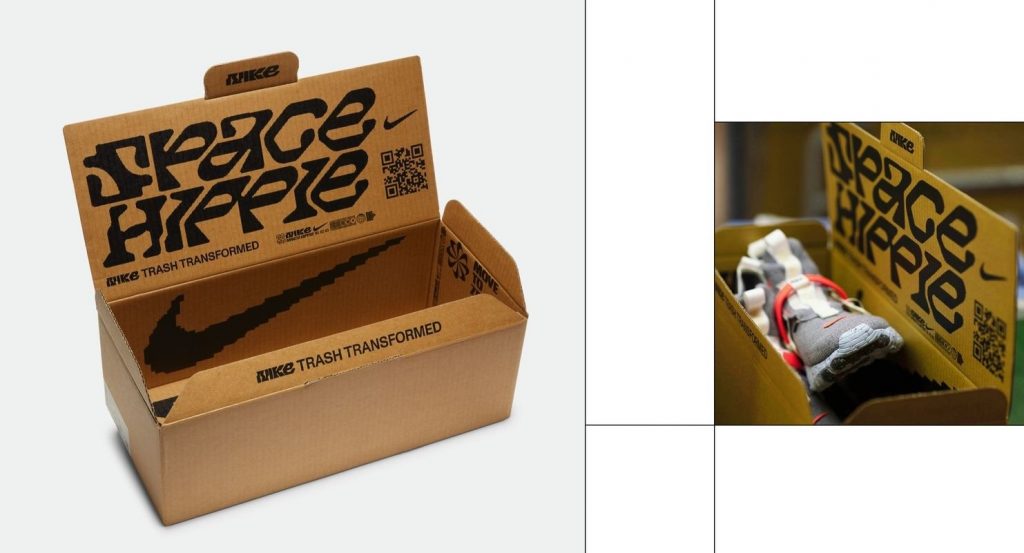 The Space Hippie project isn’t just a shot in the dark, meant to induce the feeling that Nike wants to save the world. The eco-friendly project is part of Nike’s long-time Move to Zero campaign, the goal of which is pretty apparent from the name itself.

You might not even know it and you’ve experienced the results of the Move to Zero project – the platform modifies the most commonly used technologies and materials in Nike sneakers.

Aiming for the future

Since 1994, all Nike Air soles are composed of at least 50 % recycled waste materials. And since 2008, production of AirMI appliances is done with 100 % sustainable energy sources.

Apart from all this, Nike has a whole lot of highlights regarding their sustainability mission. Their report on Nike’s impact on ecology has 80 pages. If you have a minute, you can go check out the Nike Impact report.

Let’s take a realistic look at things. Nike’s Space Hippie project, Move to Zero, or the previously discussed future of adidas won’t save the planet on their own. And the brands themselves know this. I think the essence of these projects is raising awareness about the situation. It’s much better doing something then nothing, and these ambitious projects are a great inspiration and motivation for other brands to focus their attention to the issue at hand. Next time, we’ll be taking a look at pinqponq’s take on sustainability.